1. You can inform about goods (Wood, Agricultural products etc) available for sale at SELL

2. You can inform about goods (Food, etc) available for sale at BUY

Note Why telegram is used than Whatsapp:

(Note: You can download requirements and donor details by clicking on File-> Download after clicking on above links)

Disclaimer: The site only links donors with needy. We are not responsible for any consequences

Rs.1.61 Lakh has been paid by Er.Pravin and Nizhalgal team towards the purchase of G-7 ground nut seeds from Gujarat Seed Corporation on behalf of 31 farmers (70 bags) part of Nagai Nanbargal Kuzhu…. we are eagerly awaiting to receive the seeds from Gujarat:+1::pray: Thank you all for the support… Let us be with them till they are on their own:+1::blush:

10,00,000 Tonne “Wood for Sale” from TN Delta. Plz buy or get buyers for the 📄Paper📃 and 🔥Firewood🔥 grade wood from fallen trees because of Cyclone Gaja. Plz help🙏🏾 https://gaja2018.home.blog

Plz forward to other state friends, especially to those in North India🇮🇳 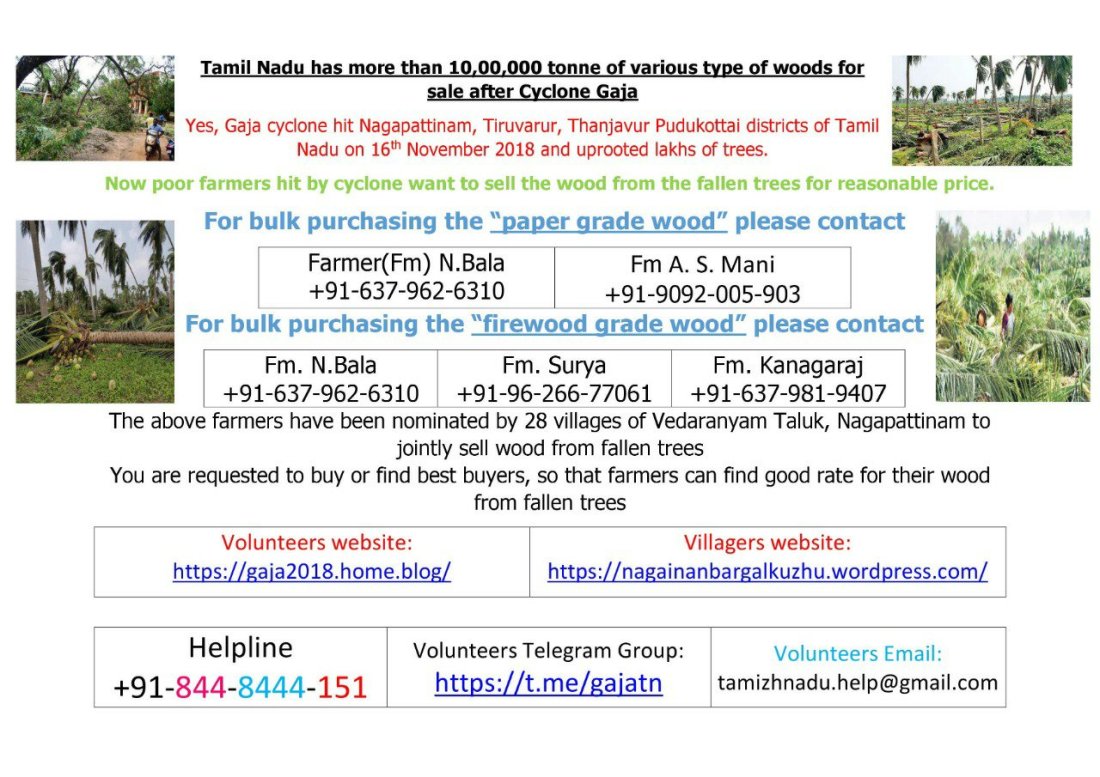 Mr.Mariappan, aged 42, a Differently abled, daily wage Labour living with 2 Girl Children lost his hut during Gaja Cyclone, we are happy to construct the hut for him with the support of Mr.Sabari and his friend Saravanan, Mayaraj Ganesh and anand 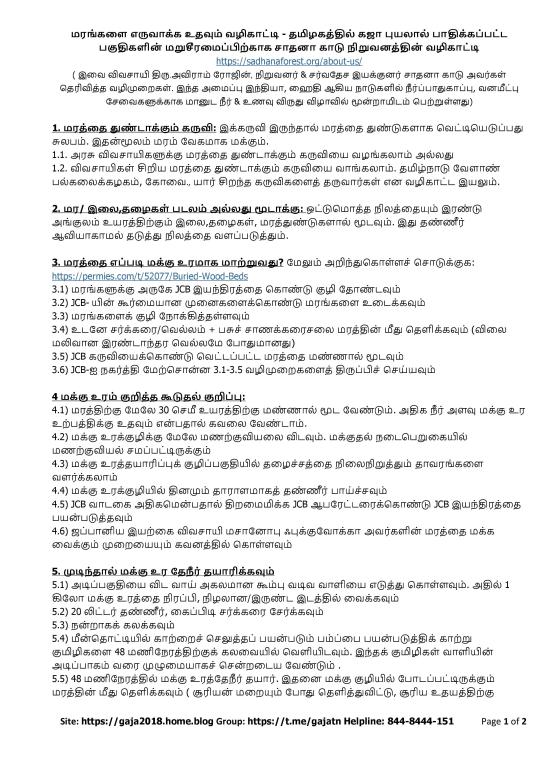 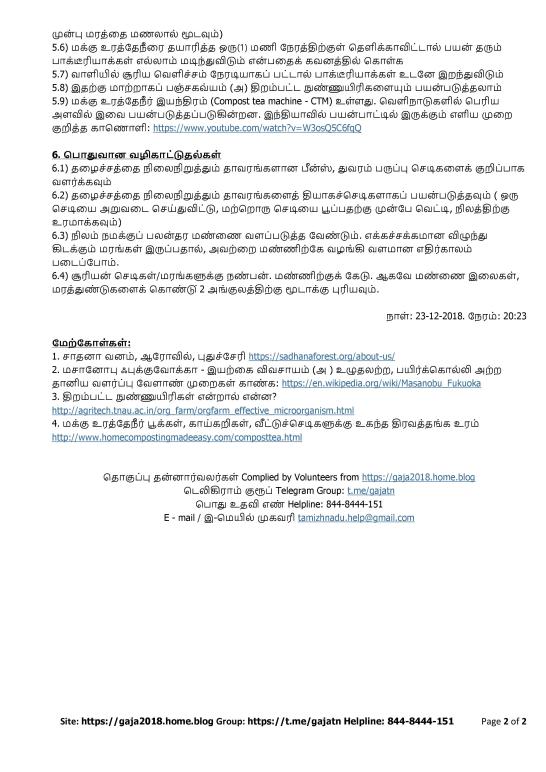 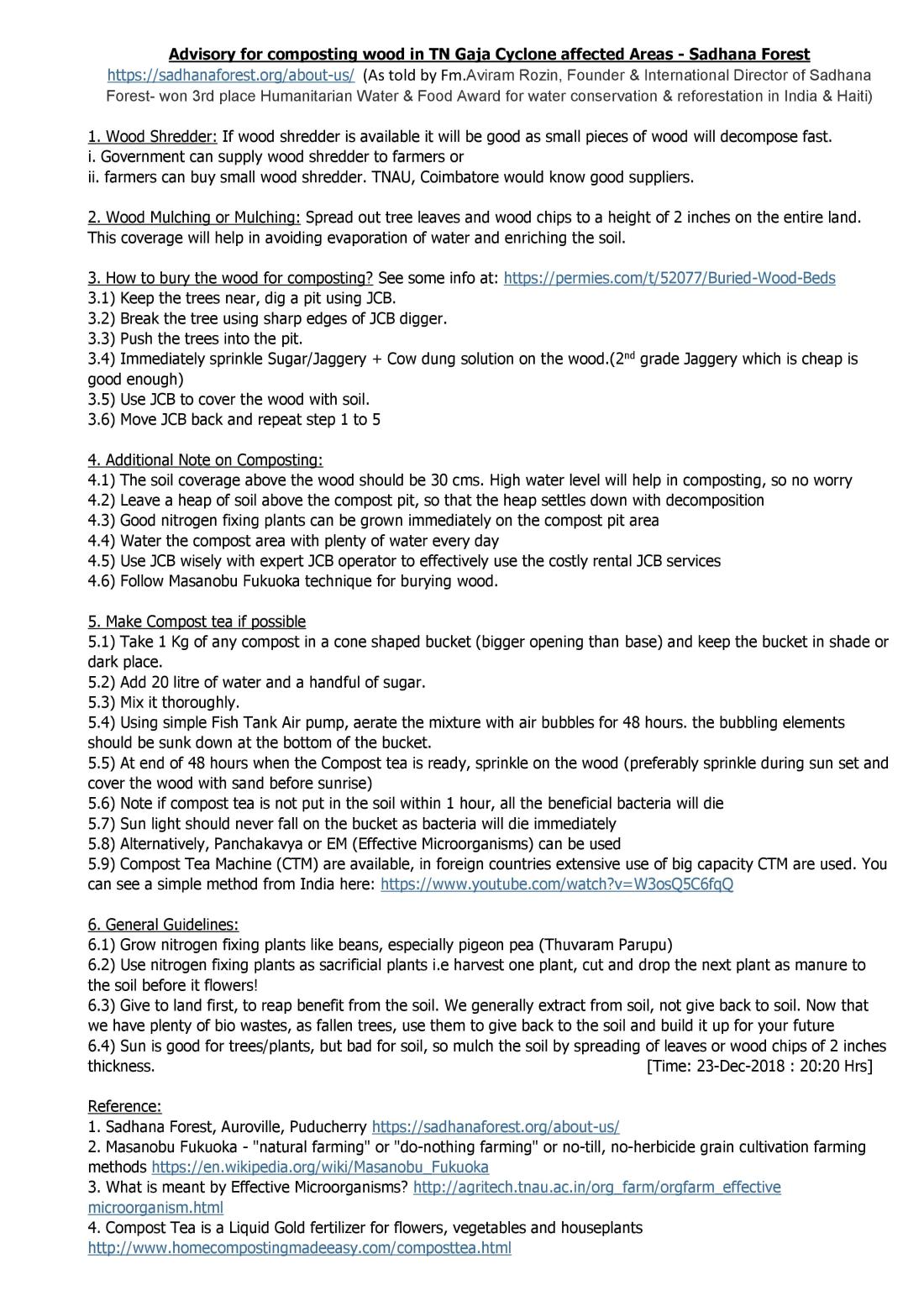 Sembodai village, in Vedaranyam block, Nagapattinam district, is one of the worst affected by Gaja but just a month after the cyclone, farmers of the area have joined hands to form an integration body as a means towards self-sustainment.
Chennai: “The body, consisting of 20 farmers, was formed to find solutions to damages caused and seek need-based funding to make Sembodai a self-sufficient green village,” said Sadhasivam, former Panchayat President of Sembodai, also one of the coordinators of the body.

In Sembodai village, more than 90,000 trees were uprooted and close to 380 houses were damaged.

However, the village people decided to take matters into their own hands and with the help of people settled in Chennai and abroad decide to cope with the disaster and also help farmers of the entire region.

Speaking to DTNext, Sadhasivam said the primary aim of the farmers body was to make sure farmers generate revenue at the earliest. “To earn money in a short period of time, farmers have been asked to opt for horticulture crops like vegetables and groundnut. The body will approach research organisations and NGOs for plant seeds at the earliest,” he added.

A youth from the village, Cholarajan, working as a Central government employee in Chennai, said the cyclone had taught them a lesson to not depend on cash crops and trees alone but also look for long-term alternatives in the form of mixed cropping.

“Farmers of our village have decided to adopt sustained farming mechanisms so that crops are not destroyed completely if another natural calamity strikes our area,” said Cholarajan.